Welcome to the EVE Development Killboard

i've been running a modified version of battles_mod (better related kills page) on my alliance's killboard for quite some time now. This mod originally was made by Quebnaric Deile. He als wrote the fleet_battles mod (original thread: http://eve-id.net/forum/viewtopic.php?f=505&t=13518) that displays an overview of all fleet battles including some very nice stats. As i updated the last one to work with EDK4 and was asked to do the battles_mod too, i thought it was a very good opportunity to combine both mods into one mod. Both use quite a bit of the same code, so it was the next logical step. Here it is now, the initial version of the combined mods for related kills and fleet battles!

Features: Live Demo for illustrating AJAX behavior: Manual side assignment:
This mod enables killboard administrators to manually fix battle reports by assigning the sides they know it's right. The assignments are persistent and will be saved in a separate database table. To restore the original mess the side assignments can easily be deleted again. If battle stats are affected for a cached fleet battle the cache will be updated es well. In rare cases, when the time frames don't match exactly, the fleet battle cache for this battle will be deleted and will be rebuilt with the next execution of the cronjob.
This screenshot shows the new Battle Setup tab, only visible to killboard admins and if the feature is enabled in the settings: 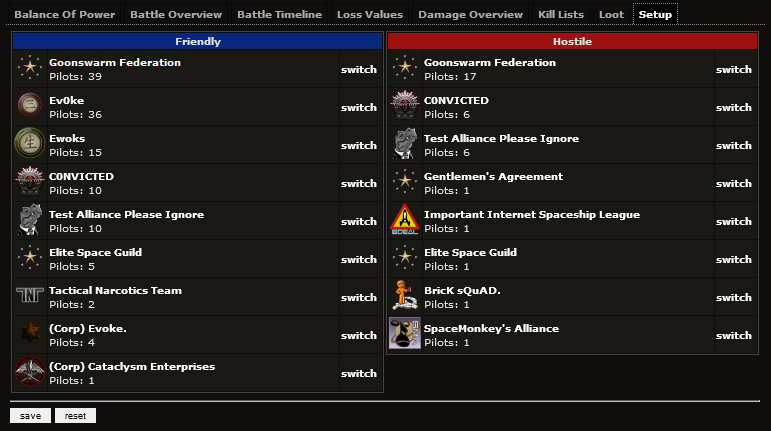 Obviously there's a lot to fix. Involved parties can be moved to the other side by clicking the "switch" link. If a party is on both sides the entries will be merged. Side switching is done via javascript and has been tested with Chrome 18, Firefox 11, Internet Explorer 10 and Opera 11.6.
When done with switching the sides the changes have to be saved by clicking the "save" button. If there are still parties on both sides when the changes are saved, the party will be treated as hostile party. The next screenshot shows the same battle report as before, now fixed: 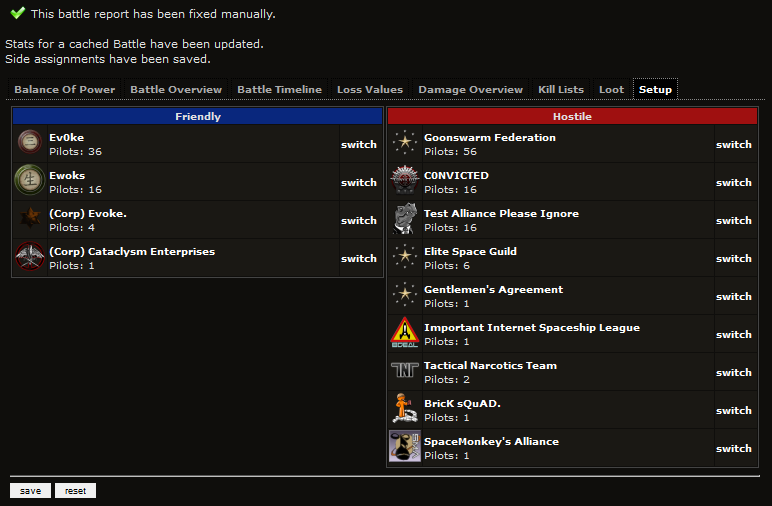 The "fixed" notification will be displayed for any battle, that has been fixed, so people know. To get back the original assignments the "clear" button in setup tab can be used.

When fixing a fresh battle where killmails are still trickling in it might be necessary haat the report has to be fixed again when all mails are posted.

Side assignments will be respected when the fleet battle cache gets updated.

Important: This feature does NOT alter/delete any of the original killmail data! You can simply deactivate it or clear the side assignments table in the mod settings if you run into serious problems!

Upcoming Features: Although the two old mods are combined in this one, it can also be used to enhance your related kills page only. You don't have to use the Fleet Battles overview, it will not slow down your Killboard!

Installation:
Update Instructions from v0.2.1:
Just like every piece of software this mod will have bugs and errors. If you find any, please post them here in the usual way, i will try to help and fix the problems. Updated versions will be attached to the opener post.

I will keep developing when i have the time, there still are things to improve. If you have a feature request, post here. Donations appreciated

Tested with a clean EDK4 installation and PHP5/7.

Disclaimer:
I will not be held responsible for any damage the use of this mod might cause to your killboard. But i will try to help and fix the cause of the problems

thanks, i fixed it, attachment in opener is updated.
Top

still not working with simple urls thou

there you got me, hadn't thought of that. Making it WORK with simple urls is easy, but changing it so it uses simple urls itself will take a bit longer, sorry for that :/
Top

added support for simple urls, attachment in OP updated
you might have to clear your template cache to let the changes take effect
Top

As soon as I log in I'll be sending you more.

Thank you my german foe

hey, would you mind changing the table in-line styles into classes or id's when you have time? This would make updating your changes/updates much easier. I'm currently using:

#br-destroyed (for the red background)
Top

Do you think you can work in "Include Adjacent"?
Top

Zagdul wrote: hey, would you mind changing the table in-line styles into classes or id's when you have time? This would make updating your changes/updates much easier. I'm currently using:

#br-destroyed (for the red background)

red background is now defined by the class .br-destroyed (change in css/style.css)


Zagdul wrote:Do you think you can work in "Include Adjacent"?

well, there i really get to feel the old code. Perhaps i should have refactored it completely on the base of the current kill_related in edk4. Perhaps i will.
Adjacent functionality added, hf

and thank you for the donation, much appreciated

Nice, and thanks for your time and effort.

Is there possible to move pilots/corps/aliances from friendly to hostille gang or back? When we fighting with RR, SB, capitals gang many times ballance of power shows hostiles as friendlis, and its destroy batlle look?
Top
Post Reply
152 posts